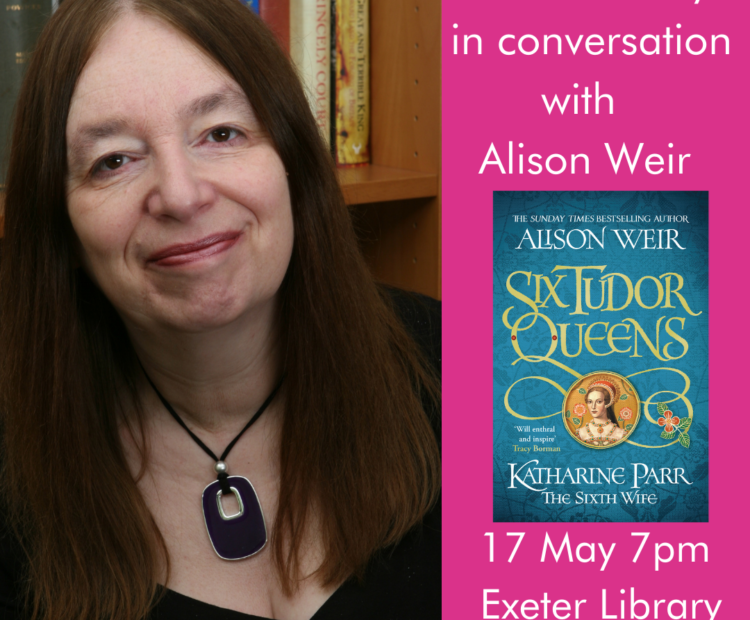 We are thrilled to be hosting an #InConversation event with historian and author Alison Weir. Join us on the 17 May when Alison will be talking to Exeter Library’s Karen about the final book in the #SixTudorQueens series, Katharine Parr, which is published on 13th May.

Alison Weir is the top-selling female historian (and the fifth-bestselling historian overall) in the UK and has sold over 3 million books worldwide. She has published nineteen history books, including her most recent non-fiction book, Queens of the Crusades, the second in her England’s Medieval Queens quartet. Alison has also published several historical novels, including Innocent Traitor and The Lady Elizabeth.

Katharine Parr: The Sixth Wife is Alison Weir’s eleventh published novel and the final book in the Six Tudor Queens series about the wives of Henry VIII, which was launched in 2016 to great critical acclaim.
This event is hosted by Exeter Library which is one of Devon Libraries and part of Libraries Unlimited. Libraries Unlimited is a registered charity (1170092) with a mission to bring ideas, imagination, creativity, information and knowledge to people’s lives and communities.

How To Write Crime, Thriller and Mystery