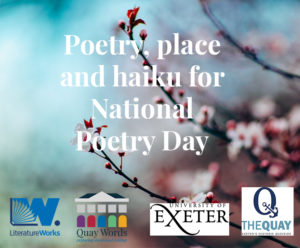 We mark National Poetry Day with poet Sara-Jane Arbury, who will introduce and perform a sequence, or renga, of haiku. The haiku were all contributed by members of the public who visited historic locations around the city as part of the recent Exeter Heritage Open Days. As writer-in-residence for Exeter Heritage Open Days, Sara-Jane invited people to write their own haiku inspired by the location and she has put them together as a renga.

Haiku is a Japanese verse form of three lines and just seventeen syllables. Haiku give a snapshot of life and feeling. As with all poetry, every word counts. Contributors to the Places of Poetry project, who have written poems about places in Devon, are also invited to share their poem(s) at the mic following Sara-Jane’s performance.

This is a partnership with the University of Exeter’s Places of Poetry project.

This event is free, but please book a place. Tickets will also be available on the door.

Sara-Jane Arbury is a writer, performer and workshop facilitator. She has been involved in the production and promotion of creative writing and live literature since 1993. Sara-Jane has been a writer-in-residence for many civic projects with national and regional councils including for the county of Herefordshire.  She has performed her poetry on national television and radio, and at numerous festivals.

Sara-Jane also runs young writers’ groups for Writing West Midlands and works extensively in schools and colleges across the country. Her poems have appeared in pamphlets and anthologies.