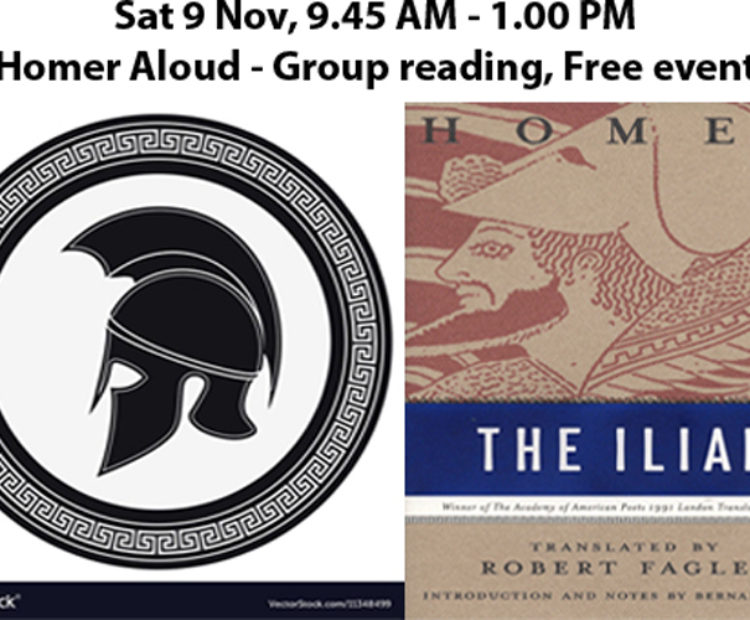 A FREE event but please feel free to register your interest by booking a place. Please see below a summary fo the event from Homer Aloud organiser Nigel Smith plus a more detailed description below. Stay for as little or as long as you want.

Come and join our friendly group reading aloud from Homer’s Iliad – the 3,000 year-old epic tale of the Greek siege of Troy to bring Helen back home to Greece. Share your thoughts about reading this epic, discuss the lives and experiences of its warriors and women, and consider its value today. Books provided. Or just come and listen, for as long or little as you like.
Not Shakespeare Aloud, this year, but Homer Aloud. We are running a free, join-in public Read-Aloud from Homer’s Iliad, the famous story of the Trojan War.
Sitting in a large circle, we each read aloud in sequence from a translation by Robert Fagles of the Iliad, pausing to discuss what we are reading and to raise questions. Some sit and listen, but most take the opportunity to read aloud from this renowned epic poem. Reading it aloud and hearing others read it aloud is a real treat! All voices are welcome and no acting is required!
This event will be the second in a series of free public read-alouds of the Iliad, which begin in Taunton Library on September 21st – and to which all are welcome!
It will be led by Nigel Smith who has been leading these events for seven years, reading Shakespeare’s plays, Oedipus Rex, and Homer’s Odyssey and Iliad. The Anglo-Saxon poem Beowulf is in preparation for a future group read-aloud.
(See https://sites.google.com/site/greekclassicsaloud/home for more details)
Homer – the name given to the Ancient Greek poet who, around 700 BCE, composed two great epics, the Iliad and the Odyssey, from ancient, traditional oral tales. These two epic tales, set in the Age of Heroes when the gods held sway on Mount Olympus, became for the Greeks the stories of their own past, the stories that gave to the inhabitants of the scattered Greek city-states a single, shared culture. It was said that an educated person was simply someone who knew his or her Homer well. Homer’s two epic poems are the seminal source of literature for all of us who live in the Western World, and are among the finest.
The Iliad
In the last year of the 10-year siege of Troy, undertaken by Greek (Achaean) forces to bring Helen of Troy back to her husband in Sparta, the greatest of the Greek heroes, Achilles, refuses to fight. As a result, the Trojan forces led by Hector begin to push the besieging Greek forces back to the sea where their black ships lie beached on the shore. Achilles’ slave-girl (war booty) has been confiscated by his commander, Agamemnon, to prop up his fragile self-importance, and it isn’t until Achilles’ close friend, Patroclus, is killed in battle, that Achilles returns to fight on the plain of Troy, and to challenge Hector.
Behind the high city walls Hector’s wife Andromache begs her husband not to leave the safety of the city, not to leave her and their young son to the mercy of the invading Greeks. Meanwhile, Helen looks on, with a loathing of both her Trojan husband Paris, and of herself for ever leaving her home in Sparta.
Watching the scene from Mount Olympus, taking sides, even helping their own protégés at times, the gods and goddesses help direct the fortunes of the two warring forces. The will of Zeus, the father of the gods, is the plot of the Iliad, through which runs the consequences of Achilles’ rage and his desire for vengeance against his commander, even at the cost of the lives of many of his Greek comrades. But even Zeus cannot always choose what happens below, or even control his own wife, the Greek-loving goddess Hera, for both gods and humans are subject to the inexorable dictates of Fate.
The Poem
In focusing on about 5 weeks during the tenth year of the siege, Homer manages to tell the entire story of the Trojan War up to the death of Hector. He embeds in his narrative many traditional short stories and references, and colours everything with the most brilliant similes which over and again paint pictures of ordinary human activity in times of peace, far away from the field of battle. This gives a rich sense of the culture of ancient Greece and the lives of men and women at all times and in all places. Homer takes no sides in the conflict, humanising friend and foe alike, evoking the eternal cost of war on soldiers, wives, children, parents, and the whole of society. These are reflections for all times, not least our own, and in our discussions of the poem we find many echoes of the challenges and pleasures we all experience in life.
The Night before Battle
And so their spirits soared
as they took positions down the passageways of battle
all night long, and the watchfires blazed among them,
hundreds strong, as stars in the night sky glittering
round the moon’s brilliance blaze in all their glory
when the air falls to a sudden, windless calm . . .
all the lookout peaks stand out and the jutting cliffs
and the steep ravines, and down from the high heavens bursts
the boundless bright air and all the stars shine
clear and the shepherd’s heart exults – so many fires burned
between the ships and the Xanthus’ whirling rapids
set by the men of Troy, bright against their walls.
A thousand fires were burning there on the plain
and beside each fire sat fifty fighting men
poised in the leaping blaze, and – champing oats
and glistening barley, stationed by their chariots –
stallions waited for Dawn to mount her glowing throne.

An extract from The Iliad translated by Robert Fagles, introduction by Bernard Knox, Penguin Classics