Word Online presents ‘Writing A Thriller: The Secrets of Suspense’ – a talk by Felicia Yap hosted by Bournemouth, Christchurch and Poole Libraries 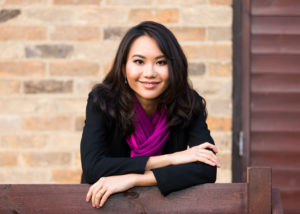 Thriller writer Felicia Yap gives a talk on how to write a killer opening, how to show not tell, and how vivid multidimensional characters can open up opportunities for intrigue and suspense. This event will be hosted by Bournemouth, Christchurch and Poole Library Service.

You can purchase a copy of Felicia’s latest novel, Future Perfect, here.

Felicia Yap grew up in Kuala Lumpur. She read biochemistry at Imperial College London, followed by a doctorate in history (and a half-blue in competitive ballroom dancing) at Cambridge University. She has written for The Economist and the Business Times. She has also been a radioactive-cell biologist, a war historian, a university lecturer, a technology journalist, a theatre critic, a flea-market trader and a catwalk model. Felicia‘s debut thriller Yesterday has been translated into multiple languages around the world. Her second novel Future Perfect (out March 2021) is a murder mystery set in a near future where computers will tell us how we will live and when we will die.