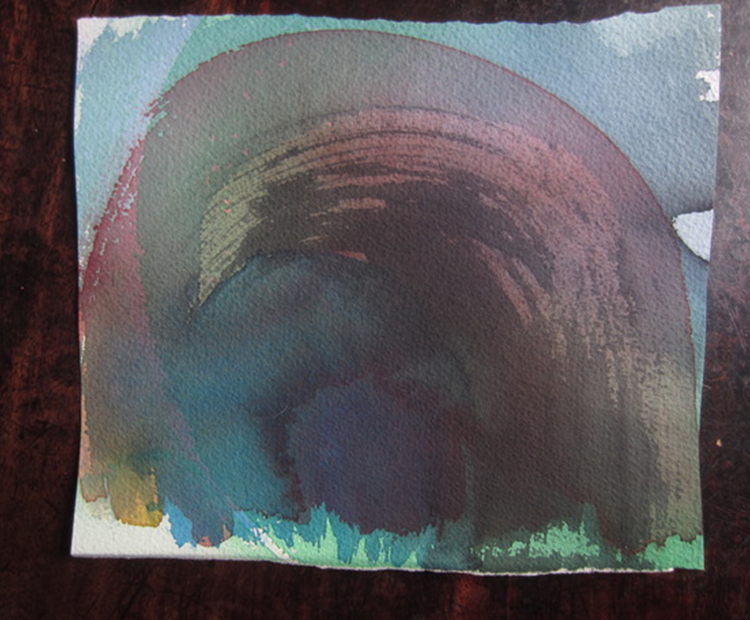 In a heartfelt letter to her ‘housemate who is always out’, poet Jen Hadfield reflects on her residency at Charles Causley’s former home, Cyprus Well and leaves some momentos  of her time in Launceston.

I keep thinking about a poem I drafted a couple years ago – never did anything with it – it began “God, I love sweeping/it’s how I imagine the perfect death.” I sort of abandoned it because it took a big swerve, as poems do – but I do love sweeping, and I had just wanted to write something about goodbyes – I’ve never been good at them but I’ve had a lot of practice recently.

So – I swept. And, over a few days, loaded the car laboriously with the bags and boxes full of poet/artist paraphenalia: posh paper, and oyster shells, and two crates of books unread, and the big bundle of outdoor clothes. The sourdough starter, and the two tupperware tubs of foraged sweet chestnuts, and the three bottles of sloe gin .. and who travels with a full complement of house-plants? A manuscript of first and second and third drafts and a 7000 word essay. I said Happy Christmas to the bin-men, and shook out your crocheted cushions, and smoothed the anti-macassars. I tried to wind the grandfather clock, but it didn’t want to go… I’m not sure it likes where it’s standing. Pendulum clocks are sensitive like that, aren’t they? Then I took off up the hill to say goodbye to the town, and have one last coffee at the Little Bakehouse, where everyone was gearing up for big family meals and house-guests: ‘I’ve got the turkey coming Wednesday – free range – still running around – I’ve got the cocktail sausages –’ low sun coming blinding over the blackened Arch –’We reckon we can do a crossword faster when we’ve both had a coffee –’

After I’d said all my goodbyes, and thanked the house, and you and I had our private word, I wished I’d been more careful loading the car. I’d obviously left one of the doors a bit open and the battery was flat as a pancake. When I finally drove out of Launceston, the engine was misfiring and the ABS was kicking in, and I struggled out of the steep junctions holding the car on the bite, half-blinded by rain and sun, a downpour at the top of Ridgegrove hill, and a rainbow over bright fields at the bottom, and the town felt sticky, as if the dark static energy of the castle had swallowed me up when I arrived, and would only release me reluctantly.

Talking of which: I’m leaving you one of my funny rainbows from the Mexican project. I got the feeling you love colour. I left it on the piano with a poem about your umbrella, and one of the new murmuration prints. How many times did I drive out to Camelford in the nick of time at dusk to see the starlings flying home from all airts, to roost at the forestry at Roughtor? That hill must be full of hippie vibes: the well, the fougou, the tor, the prehistoric settlements. And when the starlings streamed in to roost in their endless squadrons, soft whoosh overhead like squadrons of thrown darts, soft pattering of their droppings on the car’s roof and once down my cheek, it felt like the drawstring of the sky being pulled tight, like a bag of night, or the striking of the Big Top of day. That’s good luck, isn’t it, when a bird poops on you?

There was never such a time or place for wishes. I’ve been clocking the revival of the poor burdened wishing trees and sacred wells, hung with hankies and loaded with crystals, ribbons and strings and algaed teddy bears. For myself I’ve been wishing indiscriminately. I don’t see the difference between lighting a votive tealight in the kirk or sliding down that magical, polished stone in the cave in Shaklawa. We obviously still feel like we need some kind of intervention that is other than human. I never made it to the Newquay well, the one you can only reach at low-tide, that grotto of soft caverns striated like a Mr Whippy ice-cream, but I loved St Clether, where the spring runs fast and loud through the dark chapel like an electrical current. And in town, at the back of the big church, where the old faith meets the Christian, beyond the big churchyard yew whose roots are swallowing the stub of a gravestone like a constrictor, I stood with my back to the carved facade where Mary Magdalene sleeps on her soft and glittering pillow, and aimed a special veined pebble over my left shoulder.

The first three times I threw a bit hard and the pebble bounced back down at my feet. The fourth lodged safe on her back with all the others. One person told me you get new clothes if your pebble lands on her back, another that she’ll carry our concerns for us, as she sleeps. I feel a bit bad that we burden her with our worries – what must her dreams be like? – but I can’t resist a wish, a prayer.

Amongst items left for Causley by Jen were one of her ‘funny rainbows’, a murmuration print and a copy of her poem ‘Mr. Causley’s Umbrella’:

for The Causley Trust & for B., & The Little Bakehouse, Launceston

Thirty years ago, as this poem began, I thought people speaking another language were like people talking under umbrellas. Now the wardens are out clearing the flood-traps, and gutter and hill run like a river, in little surges like rills of clear pleasure; and drops pop the fabric between the vanes, as if all I could throw up between me and the rain was the hasty bivouac of my own eardrum. On the threshold of the caff, I fold the umbrella to a long dripping dart. I draw breath: a person ready to plunge underwater. Now I see I’m the one under the umbrella, and everyone else standing in the rain: gilled, they swim through its drenching blether and never appear to be drowning. The customers keep tracking in rain, bathing like sparrows in pools of talk and clatter. These women, for example: three wells of standing water. One saying very calmly, ‘one minute you’re laughing, the next you’re bawling your eyes out.’ And another, ‘but life has to go on, doesn’t it?’

I splay the panes of your book like an umbrella, and weather the present storm in its shelter. I have always wondered about umbrellas. And from time to time, no hurry whatsoever, a woman pushes a mop and bucket, and calmly erases the slick from the floor. 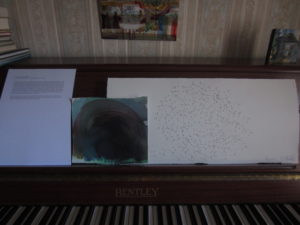 Literature Works is proud to partner The Charles Causley Trust to fund residencies like Jen’s. We look forward to continuing this work later this year.