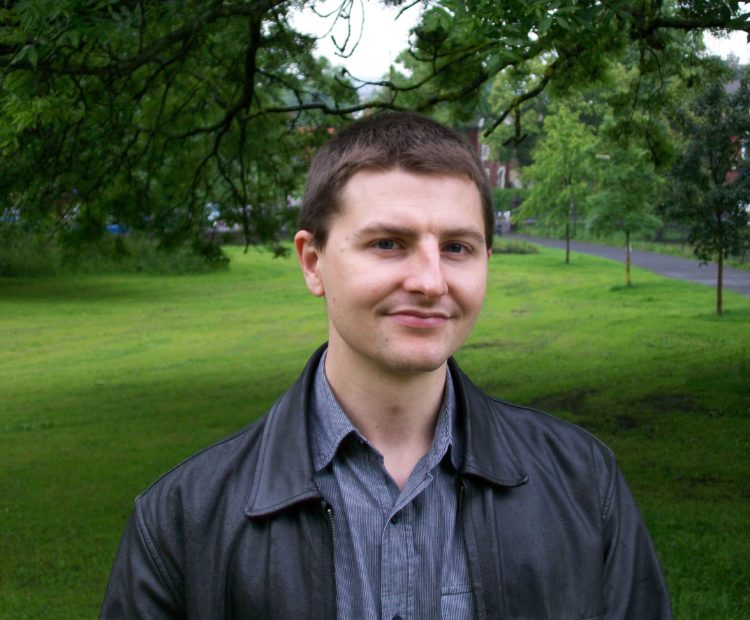 Gavin Extence was born in 1982 and grew up in the interestingly named village of Swineshead, Lincolnshire. From the ages of 5–11, he enjoyed a brief but illustrious career as a chess player, winning numerous national championships and travelling to Moscow and St Petersburg to pit his wits against the finest young minds in Russia. He won only one game.

Gavin now lives in Sheffield with his wife, baby daughter and cat. When he is not writing, he enjoys cooking, amateur astronomy and going to Alton Towers.

The Universe versus Alex Woods is his first novel.

The Universe Versus Alex Woods is your debut novel. Can you tell us a bit about the experience of being published for the first time?

I’ve loved every minute of it. Before I started approaching agents and publishers, I’d spent a lot of time reading through a mountain of very depressing statistics about the likelihood of getting published (100:1–1000:1, depending on the source), so I was prepared for the worst. It’s still a bit of a surprise that everything has gone as well as it has. I think you have to have a weird blend of optimism and pessimism to write a first novel. Without the faith that it’s all going to work out, you’d never get started, but without a healthy dose of anxiety, you wouldn’t fret over every sentence – which is really what you have to do.

Have you always wanted to be a writer?

The short answer is yes. I started writing at the age of about 6, and by 11 I knew I wanted to write books. Then adolescence took over and any sort of heartfelt creative endeavour became slightly shameful. I didn’t write any fiction again until I was 26 – but, within a year, I was completely hooked. I decided that I was going to do everything I could to make writing my career. I figured that trying and failing was preferable to not trying at all.

Alex has to be one of the most endearing narrators we’ve come across in a while. How did you conceive of his character and how did it develop?

I had Alex’s voice in my head before anything else. I knew exactly what I wanted him to sound like and, in a sense, that gave me everything I needed to know about the character (as well as the tone of the novel). All the major traits – the strange mixture of innocence and intelligence; logic, sensitivity and naivety – these things all seemed implicit in his voice at the outset. It was just a case of teasing them out. Aside from that, I also knew early on that Alex was going to have a very unusual back-story and would do something unconventionally heroic. Everything else about his character – all the details – grew from that basic premise.

The novel acts as something of a homage to Kurt Vonnegut. Can you tell us about how he became such a focal point of the novel? Are there any other writers who have particularly inspired you?

Breakfast of Champions was the single biggest influence when I started writing, because it just has this incredibly odd (and incredibly funny) way of looking at the world. There were aspects of Vonnegut’s voice – the quirkiness, the inclusiveness, the informality – that I knew I wanted to capture in Alex’s narration, and then, somewhere down the line, it occurred to me that a shared love of Kurt Vonnegut might also work really well as one of the cornerstones of Alex’s friendship with Mr Peterson. Kurt Vonnegut always enjoyed a huge, cross-generational appeal, and for Alex his writing is a springboard for thinking about the state of the universe in ways that otherwise might not have occurred to him.

As for the other writers who have inspired me, I’d also cite John Irving, Haruki Murakami, David Mitchell, Vladimir Nabokov and Sylvia Plath as big influences – though in less obvious ways, I’m sure.

You manage to tread the line between humour and serious subject matter in a highly competent manner, and the book is both witty and deeply moving. Does this duality reflect your own outlook on life?

It definitely reflects the kind of literature I love to read. But beyond that, I think humour is a very human way of dealing with tragedy. There are some things in life that are so bleak that I can’t imagine how any of us would deal with them without humour. It’s a quality I value very highly.

What’s next for you? Are you working on another novel?

Yes. It’s about a girl whose life starts to fall apart after a very bad decision.

The Mirror World of Melody Black will be published in March 2015.