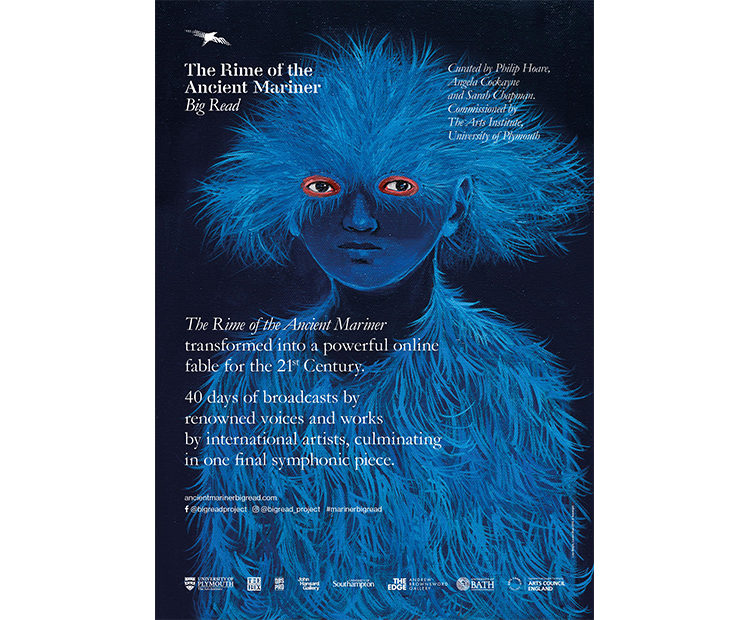 Literature Works is hosted by the University of Plymouth and we share an office with colleagues from The Arts Institute, which develops the University's public arts programme.

Their most recent project is the Ancient Mariner Big Read an online work of art presenting a series of digital readings of the epic poem. Our shared plans for a public launch event for the project included a reading with Philip Marsden and emerging writers from Plymouth, but lockdown led to its cancellation. Instead, the project launched exclusively online. Here we caught up with one of the project’s curators, Dr Sarah Chapman, Director of the Arts Institute to find out more about it.

Coleridge’s The Rime of the Ancient Mariner is a literary classic, what would you say made it the perfect choice for a Big Read in 2020?

The poem is incredibly relevant in the present, and the curators: Philip Hoare, Angela Cockayne and myself were interested in exploring how it might be reinterpreted and represented for our times. On one level it is a fable of a wrong doing and the subsequent fall-out of such a gross misdemeanour, followed by the difficult process of recovery. However it also speaks in the present to issues of migration, the environment, climate change, loneliness and isolation. It remains a powerful story, stimulating the imagination through language and providing a space to explore sometimes difficult aspects of the human condition.

We’ve been listening along to the Mariner Big Read online. Can you tell us a bit about the inspiration behind the project and how it came to life?

The Mariner Big Read follows on from the Moby Dick Big Read, which we launched in 2012 and has since reached an audience of over 10 million. Both projects were curated by the same team and we came together because of our shared love for Herman Melville’s classic novel, the environment and the sea. Very early on we realised Moby Dick was the great novel that most had heard of but few people had actually read. It is a difficult text yet most recognise the story of Ahab and the fanatical pursuit of the white whale. So we looked of ways of making it accessible to new audiences, recognising that the themes and the story continued to have relevance, and struck on the idea of breaking the text into 135 components – following Melville’s original structure. We then invited readers and artists to respond to each section, as a way of retelling the story in a new way.

Similarly, the Ancient Mariner is a well-known poem, with most recognising lines such as ‘water, water everywhere and not a drop to drink’ and also the story of the mariner and the consequences of shooting the albatross. It took three years to bring the Mariner Big Read to life, and in that time the increased digital possibilities allowed us to provide a more immersive experience for the Mariner – creating an atmospheric soundscape with visuals to present a type of reading theatre.

March 2020 and lockdown hit. What did that mean for Mariner and how has the experience of curating the project online differed to the original plans?

The project is primarily designed for online, although there is an accompanying UK touring exhibition ‘Mariner: A Painted Ship Upon a Painted Ocean’, featuring 15 selected artists from the Big Read, which includes newly commissioned artwork. The exhibition is safely locked down at the moment but we are hoping it will open at the John Hansard Gallery, Southampton later in the autumn. What we didn’t envisage was releasing the Big Read during a world-wide pandemic. The intention was always to launch on 18th April, with a live festival in Plymouth, but then Covid-19 emerged and put a stop to our plans. We thought long and hard as to whether it was appropriate to release the work during the crisis. The poem deals with difficult issues such as death and wrong-doing but also of hope and reflection. It was partly because of the poem’s underlying sense of hope, alongside the importance of art and culture to soothe and comfort in times of difficulty that we decided to go ahead and launch.

We’ve been thinking a lot recently about how literature can transcend the page and how being locked down and apart has encouraged creative thinking about being ‘alone together’. The readings for Mariner were recorded from locations around the world. What can you tell us about the motivations of the chosen readers for taking part?

The readers and artists were selected because of their interest in the poem. We also wanted to select readers who you might not traditionally associate with classic 18th/19th Century literature – Iggy Pop, for instance, or speakers you might know in a different capacity such as, David Walliams or Jodie Whittaker and Marianne Faithfull. All our contributors were excited by the project and knew the poem and its importance. Importantly the Big Read is free and accessible to all, and all our contributors were wedded to the idea that great literature should be available to everyone. Similarly we selected artists because of their interest in the overarching themes. The poem contains such fascinating motifs – the image of the albatross, guilt, terror, loss and recovery – that can be explored by artists in so many ways. The poem also has an illustrious history of being associated with great artwork as seen in the work by Gustave Doré, the 19th Century artist who provided the wonderful gothic illustrations for the poem in the Victorian era. Indeed, the Mariner Big Read website and logo pays homage through its overall design to Doré’s original work.

How do you think that the online Mariner Big Read will contribute to a collective history of this moment in time and what are your hopes for the legacy of the project?

The great thing about the project being online is that it is accessible, if you missed the daily launch, it doesn’t matter, you can go back and rediscover time and time again. The accessibility and global reach is incredibly important – these stories and fables bind us together and provide a sense of commonality. Looking back at the Moby Dick Big Read, it has since become a teaching aid, helping a new generation of audiences understand the book. I very much hope that the Ancient Mariner Big Read will be used in a similar way, indeed it already has been picked up by various educational establishments in the UK and the US, from researchers, universities and schools where the poem is part of the national curriculum.