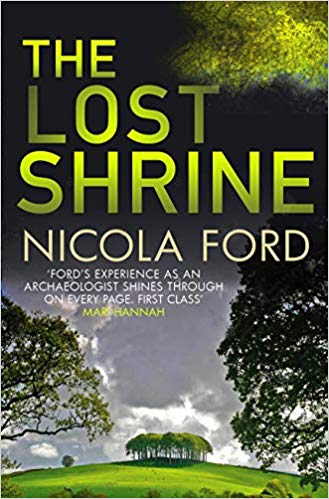 One thing we love here at Literature Works? Writing about place. Two things our Literature Development Officer loves? Historical fiction and a good grisly murder (strictly fictional you understand), so when archaeologist turned writer Nicola Ford’s latest novel set in Wiltshire landed on her desk, she was only too happy to delve into its depths…

The Lost Shrine is the second Hills and Barbook novel and after a brilliantly pacy and suitably twisty debut, the return of Clare and David did not disappoint. Picking up some months after the grisly goings on at Hungerbourne in the first novel, The Lost Shrine sees Clare Hills installed in the team of the Hart Unit – a well-meaning, if financially struggling archaeology department.

When the opportunity for commercial work presents itself, it looks as if the unit might be saved, but is all as it seems? Bailsgrove, the site of a potential housing development has an eerie present – it is the site of the recent death of a respected archaeologist Beth Kinsella. Steeped in mystery and more than a fair does of Wiltshire’s druidic history, Bailsgrove becomes whispered about as a place with a looming curse.

There are those in the academic and archaeological fields who believe that Beth, notably erratic and highly introverted was obsessed by the notion of Bailsgrove’s historical significance and ended her own life, but there are those who feel that there is something darker at work. Enter Hills and Barbrook – a stellar team of super-sleuthing archaeologists who question everything, one layer at a time.

The by now familiar characters here are as endearing and complex as in Ford’s debut, showcasing the author’s background to excellent effect, shedding light on the history of the place and laying just enough clues for the stealth reader to uncover the truth which is hidden beneath layers of deceit and indeed soil.

Taking the lead for a second time Clare is accompanied by her colleague Jo, whose humorous interspersions and quick wit provide relief for Clare and for the reader as the plot takes a compelling, if dark turn. In Clare readers have a complex and headstrong heroine who gets herself in to her fair share of scrapes but who is clever and charming and someone the reader wishes to root for. Certainties are questioned and clues are uncovered in this novel which deals with the world of underground antiques dealing, Druidic practice and a good dose of intrigue, The Lost Shrine is a thoroughly recommended read. We just wonder what Hills and Barbrook will get up to next.

The Lost Shrine is available now, published by Allison and Busby.

Nicola Ford is appearing at Greenway Literary Festival on 7th June, where she will be talking about her books and about Agatha Christie’s love of all things archaeological. Book your tickets here.