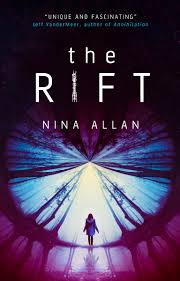 The Rift is a novel marketed in the genre of literary science fiction however, as soon as I began reading it, it became clear that there were multiple genres at work here: science fiction, mystery, thriller and psychological fiction to name but a few.

Naturally then, that it became less easy to identify by genre conventions. Fitting really as a central conceit of the novel revolves around identity and what it known and unknown.

Telling the story of two sisters at a crucial point in maturity, The Rift explores familial relationships and bonds and how the human race identify with one another. It also explores identity in a broader sense – who are we really and how do we know the answer to that question? These somewhat philosophical questions are perfectly framed within the central dramatic tension of the plot: There was already a rift developing between the sisters, but this is made only too real when Julie is suddenly missing.

Years, decades pass and as Selena’s character is excellently rendered and developed in the ‘sister-left-behind’ narrative that emerges. Indeed she seems to flourish, until suddenly twenty years after her disappearance, Julie returns. Suddenly the rifts that are present in the novel are no longer simply emotional and physical but also concern the passage of time and the ripple effect of a single event on the past, present and future. In this way, The Rift was for me, rather reminiscent of The Butterfly Effect.

Not only does her sudden return impact upon the narrative and upon Julie’s relationship with Selena but in a further layer of complication, the circumstances of her disappearance – and her whereabouts for the past two decades – (Julie claims to have been inhabiting another planet), conspire to raise more questions such as the nature of truth and deceit, reality and fiction and the very core of existence are raised.

A novel that asks and raises many more questions than it answers, The Rift is a compelling story of humanity’s existence, of love, loss and the nature of belief. An utterly captivating read.

The Rift by Nina Allan is out now, published by Titan.