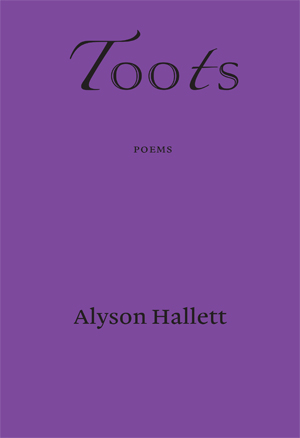 Here at Literature Works with projects such as National Memory Day and Writing Places we’re interested in the ways that the poetic form is connected to notions of memory and place and we think Toots excellently showcases the importance and influence of both. Contained within this powerful pamphlet are poems written about the time Hallett spent as volunteer on the Isle of Iona. In it, the island is celebrated as well as the illustrious characters who make up life upon it and in particular Toots.

An irrepressible spirit, reverence to whom is given by the voice of the poems, it is difficult not to be captivated by Toots from the outset of the collection. Indeed, the opening poem ‘the first time’ paints such an arresting picture of this woman that one is driven on in search of more appearances by her.

In a somewhat unique and utterly charming poetic choice, many of the poems featuring Toots have titles which are part of the opening line and I got the impression that the voice of the poems is so caught up with the memory of her that the words and memories just tumble forth as breathlessly energetic as the woman herself seems to be.

It is difficult to select a favourite from such a joyous celebration of bygone years and bygone people, but as a lover of words I have to say that the poem which most leapt off the page for me was ‘mother tongue 1’, which excellently renders our complex relationship with language. I just love the image conjured forth by the lines:

My english ears could only hear

a language on fire

a hallucination of speech

There is such a simple and yet eloquent beauty to that description of words that I can only hope to live up to as I write this. A delightful collection there is a poem exploring the spectrum of emotions which so often accompany reminiscence – there is humour, love, sadness, regret and respect here and a lasting portrait of Toots which I’m sure I’ll be revisiting.

Alyson will be taking part in Word on Tour on 13th June, alongside musician Jim Causley at St Ives library. Tickets are available here