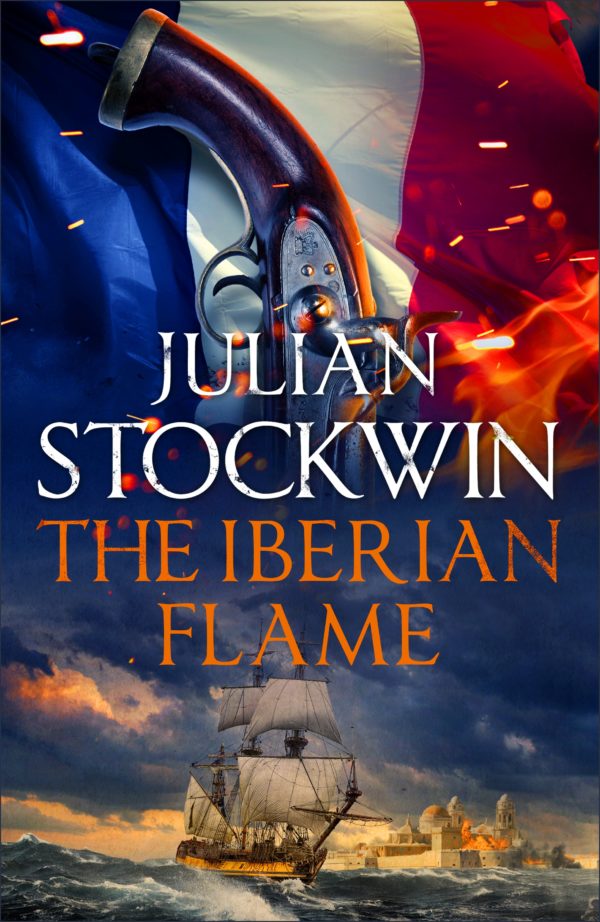 Summer and if you’re dreaming of time spent by the sea, why not delve into The Iberian Flame, the latest book in Devon based author Julian Stockwin’s twenty-strong series of maritime historical novels?

The compelling things about this series is its protagonist Thomas Kydd’s unconventional beginnings in the Navy. Far from the most revered of heroes, Kydd has a complex and utterly absorbing relationship with the men he serves with for the country he loves. He is intense and interesting and on this, his twentieth voyage on the high seas, he has lost none of his appeal.

In this latest novel, Kydd is thrown into the middle of a powerful political play which is casting the Peninsula into turmoil. Napoleon continues to garner prowess when he signs a treaty that will see Portugal dismembered and Spain pulled into a climate of betrayal and machinations. Here is a novel which deals in the complexities of a naval war and which excellently showcases the symbolic strength and simultaneous vulnerability of the British Navy during this period. Amidst this, Kydd faces struggles of his own – forced to confront a face from his past, one who has never meant him well, he is pushed to breaking point. How will he react and what impact will this have on British efforts to stop the inevitable?

The novel’s prose is fast paced and engaging, propelling the reader through the story and contributing to the various tensions central to the plot. Stockwin’d considerable experience of the Navy shines through to provide informative and shrewd observations throughout. The novel also excellent renders some of Britain’s naval centres, particularly Plymouth and Devon which will add another layer of intrigue for maritime aficionados. There is so much here for those who are fans of seafaring adventures, but also an excellently sustained sense of the history: politically and socially of the period. A highly recommended swashbuckler of a novel.

The Iberian Flame by Julian Stockwin, is out now published by Hodder & Stoughton, £20.

We caught up with Devon based Julian Stockwin about what it's like to write a series and how his naval roots impact on his writing.

1. The Iberian Flame is the twentieth book in the Kydd series – congratulations! Can you tell us a bit about what it’s like to stay with a character’s story for so long – what’s the process of putting the series together like?

With so many titles in print now I have come to know my hero Thomas Kydd pretty intimately – and I have a great respect and fondness for him. In many ways he is a real character to me, living in a parallel universe that I know very well. Right back when I first considered writing a series I knew I wanted to have the space to grow my character, and for each book to show change and development in both his personal and professional life. In a former role I was a computer systems designer and I think this discipline helped greatly in the early stages in charting out broad outlines of the books. Initially I had a dozen mapped out – my hero’s rate/rank in the navy, story location, any relevant battles, social issues of the time etc. for each title. Of course this number has grown considerably as I delved more deeply into the rich historical record, but that early work has paid off in bringing consistency and sequential structure to my Kydd tales. Actually I love writing a series as there is so much more scope for character development than in just one book!

2. The novel thrusts Kydd right into the middle of great turmoil. What is it about this character that gives him the resolve to keep fighting in the name of his country?

One of my American readers told me that to him Kydd is ‘true north’ – and I think this sums him up quite well. Kydd is basically a very decent individual who loves his country and the sea service in which he has decided to build his career. He has made the incredible journey from a seaman on the lower deck to the quarterdeck as an officer. Not many achieved that in the Age of Sail but a few did and one of the imperatives in my early days of writing was to distill just what enabled a man to do this, which I hope I bring out in the books.

3. You have a naval background, how do your own experiences of life at sea impact upon your novels?

I have had the good fortune of serving in the Navy in a number of different regions – the UK/Europe, the Pacific and Asia. I’ve also experienced life on the lower deck, starting as a boy seaman, rising to petty officer – and later being commissioned as an officer. These have provided insights that I have drawn upon in my writing. I have also witnessed great storms at sea, tragedy and death – and the special companionship of mariners. Although of course it is not necessary to have experienced life at sea to write about it I am able to dip into a capacious memory bank of life in Neptune’s Realm.

4. What would be your one tip for writing a compelling series of novels?

To my mind that one tip would be to really get to know your main character. Make sure that he has enough of the ‘right stuff’ to carry a series through and also both strengths and human frailities that a reader can identify with. Many of my readers tell me they live and breathe in the Age of Fighting Sail through empathy with my hero Thomas Kydd.

5. You’re based in the South West. Does the region play a role in your writing life – can you describe a ‘writing day’ for us?

My wife Kathy (with whom I work very closely) and I moved to Devon over ten years ago in search of an ideal writing environment and I think we found it in the South Hams – quiet, yet with London and other centres accessible. We live near the River Erme in Ivybridge and often walk along its banks discussing plot points. The sound of the babbling water seems so conducive to creativity.
One thing I learned as a writer is that you have to have real discipline. It may be a lovely summer day when a picnic or ramble beckons but the daily research tasks or writing targets must be attended to. Kathy and I have separate studies linked by a computer network and a voice intercom. Quite often in the early stages of a book she and I will work together on a large white board to plan the narrative arc and various subplots. We are at our desks shortly after 8 and apart from a short break to wander into Ivybridge around 11 we work until lunch. After our meal I take a 40 minute nap before resuming work in the afternoon. The day concludes around 7:30 when we have dinner.

6. What’s your next writing project?

Just last Thursday I was contracted by my publisher Hodder & Stoughton to undertake another four books in the Kydd Series. I have already started the research and planning of the first book in this new contract, working title ‘To Eastern Seas’. This will see my hero in the East Indies, the Spice Islands – but I don’t want to give away too much at this point.

Your readers may be interested to note that there will be another Kydd title this year A Sea of Gold – and it’s out in November. This will see Kydd alongside the legendary frigate captain Lord Cochrane in a relationship that will lead my hero, almost simultaneously, to first glory, then ruin. A whisper of hidden Spanish treasure is his only hope of salvation…