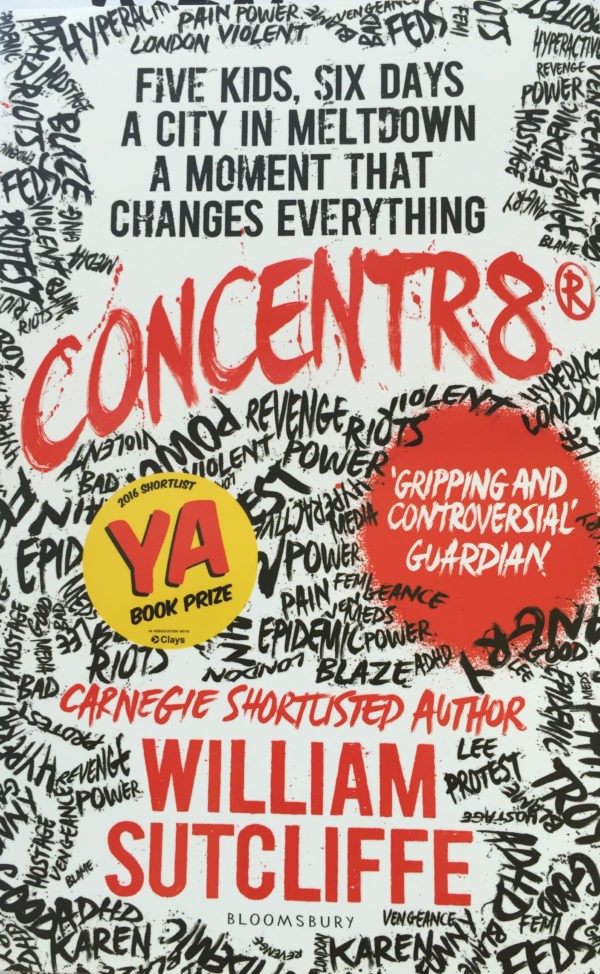 "Concentr8® is a wild satire on gang culture, urban youth and the ADHD epidemic – a funny, violent and blisteringly contemporary read. They’ve got a hostage, but don’t really know what they want, or why they’ve done it. And across the course of six tense days, with a journalist, a floppy-haired mayor, a police negotiator, and th sinister face of the pharmaceutical industry, they – and we – begin to understand why…"

Concentr8® is a prescription drug intended to help kids with ADHD in a near-future London and Troy, Femi, Lee, Karen and Blaze are the kind of kids the authorities, teachers and the medical profession want to keep taking it. They are ordinary young adults who live with the reality of “getting on from day to day to day knowing you ain’t never going to have nothing – and no job nowhere with your name on it and never will be.”

Each character takes up a chapter, letting us into their heads to follow their reasoning and the effect it has on the decisions they make. Only the young people have enough personality to deserve a name and the rest of the players are defined by their various positions of power, or lack of it; The Journalist, The Mayor, The Negotiator and The Hostage. The result is a hugely engaging sense of immediacy and fly-on-the-inside-of-the-brain rush, the characters revealing themselves and each other more through what they don’t say, through what they hide from each other, than through what they eventually do – a lesson in the contractions between thought and action. The story looks at the consequences of inaction as much as the choices made; “If I could have run off then. Easy. Could’ve just not got on the bus, walked away, whatever. But it’s hard to describe that feeling. It’s like you’re on rails or something, cause it was all of us, it weren’t like I was thinking for just me. We was a unit and I mean I weren’t in control. I was only a passenger.”

Sutcliffe has created a world detailed and realistic, set in a near-future and delivered in the characters’ own voices. By prefixing each chapter with contemporary research into the uses and prescriptions of Ritalin in modern times he lends a truly powerful and apocryphal edge to the kid’s stories. Readers of any age will be shocked as they put two and two together around the levels of control which industries and authorities are exerting over anyone they consider an outsider and as well as being a cracking good read, Concentr8® is a stark reminder of the dangers we unleash when parents and educators are encouraged to medicalize children’s behaviour.

Troy, Femi, Blaze and the gang are not always likable, but they do the best they can with what they’ve got. Any reader will think they know one of all of them. When we see their personalities and motivations revealed as they confront the universal challenges of peer pressure, freedom, individuality, power and control, they are certainly the most authentic and genuinely loyal of the bunch.

The humour and close-knit ties of friendship against the cold face of power and control will resonate with young adult readers – and their parents and teachers might do well to pick it up too. Concentr8® offers a slice of life as lived in many cities today, without sentimentality or apology or romance, full of sex and drugs and confusion, which readers will find mesmerising.

There are rarely any happy endings but there is still the hope that this time will be different, that justice will be done.