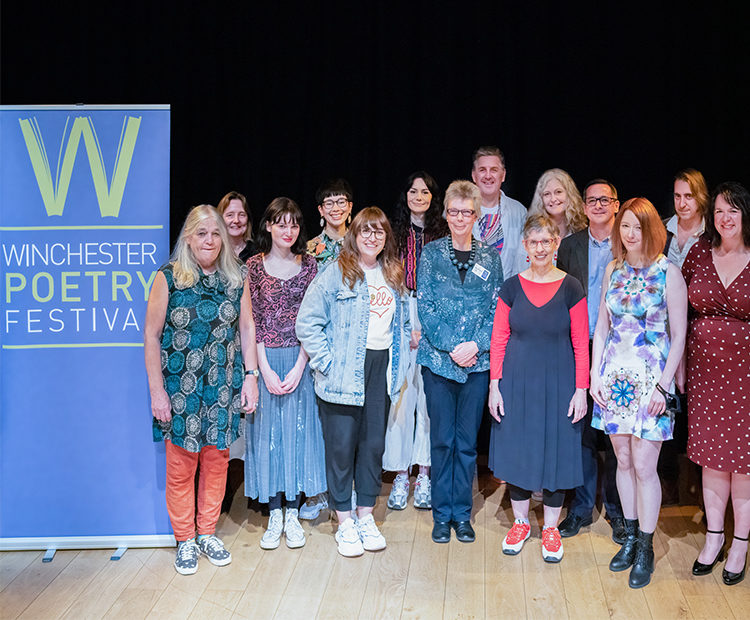 This annual international competition aims to promote and foster exciting talent and the entries this year did not disappoint. The winners were announced at the Festival, which was attended by nearly 1000 people either online or in person.

Lesley Saunders was named the winner of the 2021 Winchester Poetry Prize with her entry entitled The Starlings.

Lesley becomes the sixth winner of the prize, which is sponsored by Paris Smith LLP, and once again attracted thousands of entries from around the world including Australia, Nigeria and United States of America.

All of the longlisted poems were performed by their writers either live at the Festival, or by zoom or pre-recorded video.

For the second year running, Imogen Cook was awarded the prize for the  best poem by a poet living in Hampshire for her poem FRANKENSTEIN.  The Hampshire Prize is supported by Warren & Son.

Jacqueline Saphra, poet and editor judged this year’s competition and said: “The poems submitted for this year’s prize, especially the brilliant winners whose poems continue to move me through many readings, prove that we live in challenging, painful and even occasionally joyous times.

“But more importantly, they are testament to the truth that writing a poem is an act of courage as well as an act of skill and creativity; that poetry, especially in this era of pandemic when most of us have experienced more isolation and separation than ever before, has a unique capacity to offer up a sense of commonality and connection that reminds us we are not alone.”

The Festival was held at the Discovery Centre in Winchester and celebrated poetry and the hope it gives people in times of need. The event was the culmination of an amazing, five-month programme of online events, and included familiar events such as Things Being Various featuring outstanding Irish poet and Professor of Poetry, Paul Muldoon, workshops and readings and performances by the remarkable poets Liz Berry, Patience Agbabi, and Romalyn Ante, as well as with Hampshire Poet Kathryn Bevis, Poet on the High Street Jonny Fluffypunk and Winchester Muse.

Jane Bryant, Chair of Winchester Poetry Festival, said: “We were thrilled to see so many people attend the Festival, either with us in person or online. This year has been like no other and we have worked hard to ensure there was something for everyone, so it was great to see our visitors being able to experience what makes poetry truly special.

“Congratulations to all of the winners and to everyone who submitted their work this year. To put forward a piece of work, which is really a piece of you, is a brave and courageous thing to do. Thank you to all our wonderful volunteers who helped us over the weekend and to everyone who came along. We are already looking forward to the next Festival.”