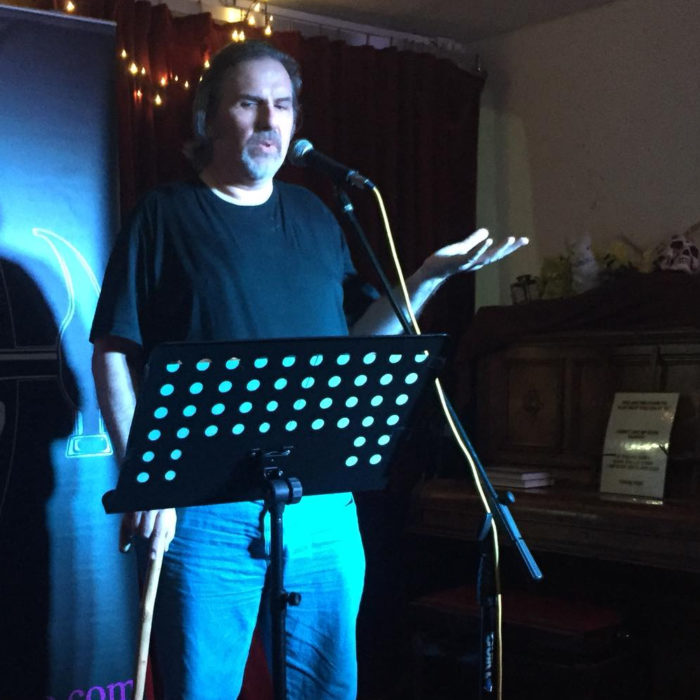 Peter Roe lives in Bridport. He is a performance poet, writer, film-maker and self confessed nerd who likes to shatter peoples misconceptions about computer geeks!

His debut collection Technology Bytes Back was released in September 2018 and comes from that place where technology meets people and the mayhem that follows. He also turns his attention to Dr Roberts, Mary Anning, Judge Jeffreys, tractors, moustaches, medicine, diets, food, nature and impossible cats.

Peter was runner up in The Bridport Short Story Slam in October 2018, he has been The Deputy Bard of Caer Dur (Dorchester), finalist in the Apples and Snakes South-West Slam 2018, long listed in ‘Writing Without Limits’ for The Yeovil Literary Prize 2017 and winner of The Western Gazette Best Local Writer 2017. In his ‘previous life’ as an educator and technologist he has won awards for web site design and photography.

Peter is from working class roots in Derbyshire and went to work at sixteen. “I always felt like I was on the outside of a window looking in… As an adult I was diagnosed with Aspergers and ADHD and it was if I had been playing football without knowing the rules Things were suddenly clear and I knew where the goalposts were!”

He goes on to say “I went through further education in my thirties and ended up working in education before having my legs kicked out from under me by physical disability. Someone recently asked me ‘How long have you been writing?’. I smiled and replied ‘Since I was about four…’. So I have always written. When I became disabled I spent three years feeling sorry for myself and then three years trying to write my way out of it.”