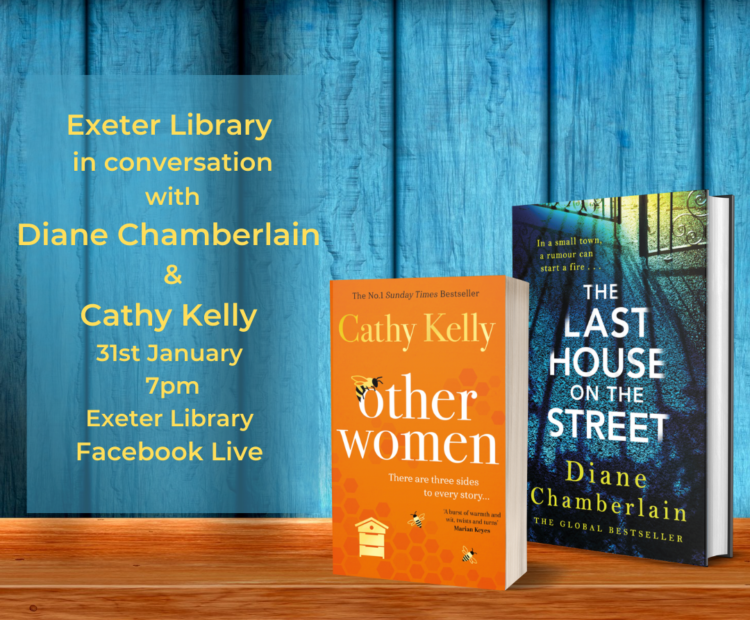 We are thrilled to be welcoming two queens of fiction for an #InConversation event with Exeter Library. Join Karen as she chats to hugely popular best-selling authors Diane Chamberlain and Cathy Kelly about their latest books.

About the books:
The Last House on the Street by Diane Chamberlain
1965. A young white female student becomes involved in the fight for civil rights in North Carolina, falling in love with one of her fellow activists, a Black man, in a time and place where an interracial relationship must be hidden from family, friends and especially the re-emerging Ku Klux Klan. As tensions rise in the town, she realises not everyone is who they appear to be.
2020. A recently widowed architect moves into the home she and her late husband designed, heartbroken that he will never cross the threshold. But when disturbing things begin to happen, it’s clear that someone is sending her a warning.
Who is trying to frighten her away, and why?
Decades later, past and present are set to collide in the last house on the street.

Other Women by Cathy Kelly
Three women. Three secrets. Three tangled lives…
Sid wears her independence like armour. So when she strikes up a rare connection with unlucky-in-love Finn, they are both determined to prove that men and women can just be friends. Can’t they?
Marin has the perfect home, attentive husband, two beloved children – and a secret addiction to designer clothes. She knows she has it all, so why can’t she stop comparing herself to other women?
Bea believes that we all have one love story – and she’s had hers. Now her life centres around her son, Luke, and her support group of fierce single women. But there’s something that she can’t tell anyone…
With her inimitable warmth and wisdom, Cathy Kelly shows us that in the messy reality of marriage, family, and romance, sometimes it’s the women in our lives who hold us together.
Join us here in Facebook for what promises to be a fascinating talk with these two internationally successful authors.

Feeling the Heat: Writing Today and Tomorrow with Maggie Gee