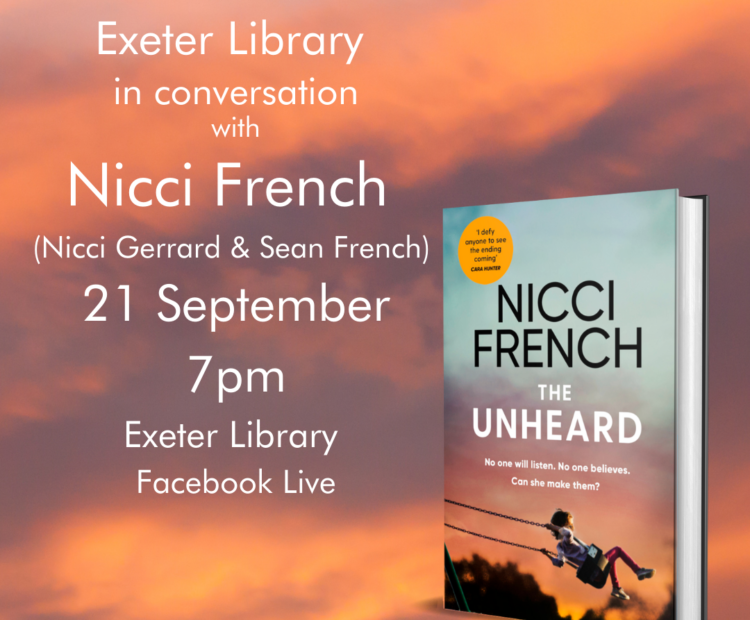 For more info or to join the event live : https://fb.me/e/LnuNPubi

We are excited to be joined by journalists Nicci Gerrard and Sean French who write under the pseudonym of Nicci French. There are 23 novels by Nicci French, including the bestselling Frieda Klein series, published in thirty-one languages. Nicci and Sean have sold in excess of 15 million copies of their novels worldwide and will be talking to Exeter Library’s Karen about their latest novel The Unheard.

About the book:
Tess’s number one priority has always been her three-year-old daughter Poppy. But splitting up with Poppy’s father Jason means she cannot always be there to keep her daughter safe.

When Tess finds a disturbing drawing, dark and menacing, among her daughter’s brightly coloured paintings, Tess is convinced that Poppy has witnessed something terrible that her young mind is struggling to put into words.

But no one will listen. After all, it’s only a child’s drawing, isn’t it? Tess will protect Poppy, whatever the price. But when she doesn’t know what, or who she’s protecting her from, how can she possibly know who to trust…?

Join us for what promises to be a fascinating evening.