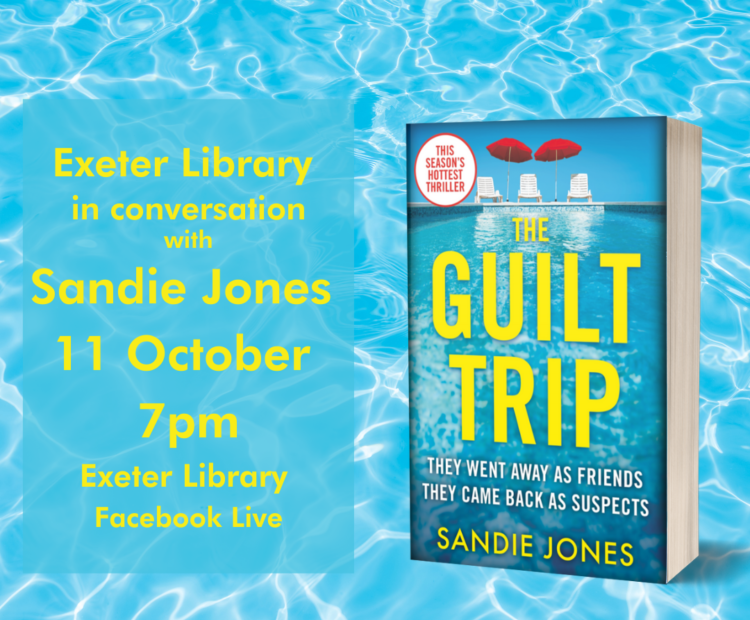 join us as for an #InConversation event with Sandie Jones as she talks to Exeter Library’s Karen about her new book The Guilt Trip. This a dark and twisty psychological thriller from the author of the Reese Witherspoon book club favourite The Other Woman.

They went away as friends
They came back as suspects . . .

Jack and Rachel. Noah and Paige. Will and Ali. Five friends who’ve known each other for years. And Ali, Will’s new fiancée. To celebrate the forthcoming wedding, all three couples are having a weekend get-away together in Portugal. It’s a chance to relax and get to know Ali a little better perhaps. A newcomer to their group, she seems perfectly nice and Will seems happy after years of bad choices.
By the end of the weekend there’ll be one dead body and five people with guilty consciences wondering if they really know each other so well after all. Because one of them has to be the killer…

Sandie Jones is the author of The Other Woman, The First Mistake, The Half Sister and The Guilt Trip. A freelance journalist, she has contributed to the Sunday Times, Daily Mail, Woman’s Weekly and Hello magazine. She lives in London with her husband and three children.