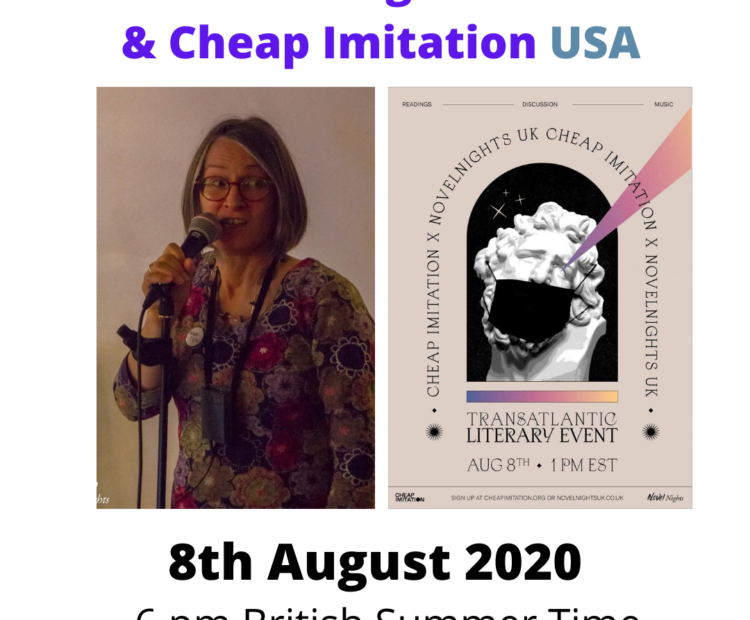 An online, transatlantic, literary party for writers with live readings, literary conversation, and music with British and American authors.

Writers are coming together from Britain and America to showcase their writing and discuss literature. The event is hosted by UK-based Novel Nights and US-based Cheap Imitation. The UK novelists are: Fiona Blakemore, David Lloyd, Martin Reeve, Sophie Draper and Kim Squirrel.

This came about from literary networking between Novel Nights in Exeter and an American student studying at the University of Exeter. David C Carstens is now back in the states and wanted to continue the good-time vibe of Novel Nights. His literary magazine, Cheap Imitation is being launched and so the two organisations are coming together for a literature throw-down.
UK time is 6pm but the event takes place at 1 pm in the states. Please join us.

Novel Nights aims to develop writers by programming author and publishing talks to demystify the publishing industry. It showcases writing talent by providing a platform and networks for writers. It’s based in Bristol, Bath and Exeter in the UK, but now operates online. www.novelnights.co.uk

Cheap Imitation is a new literary arts organization devoted to showcasing and creating innovative and original art and literature. Rather than merely focusing on publishing fantastic work by others, Cheap Imitation actively works to ensure that their magazine itself functions as a work of art, using the work of our contributors as building blocks in a greater artistic structure.

More information on the organization, events, and submissions can be found here: www.cheapimitation.org

How To Write Romance Day