Patrick Gale Takes Nothing With Him 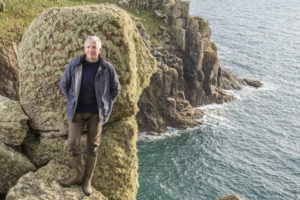 Patrick Gale, Cornish novelist and author of the International Emmy-winning Man in an Orange Shirt, talks about and reads from his latest bestseller, Take Nothing With You, a sad-funny comedy of resilience and survival.

Patrick Gale was born on the Isle of Wight in 1962. He studied at Winchester College and New College, Oxford. In 1988 he moved to Cornwall where he lives with his husband, the farmer and sculptor, Aidan Hicks, on their farm at Land’s End. He is a keen cellist, gardener and artistic director of the North Cornwall Book Festival.

In 2017 his Man in an Orange Shirt was screened by BBC2 as part of the Gay Britannia season, which also featured the documentary All Families Have Secrets – the Narrative Art of Patrick Gale. Continuing to be broadcast regularly around the world, it won an International Emmy for best miniseries. He is currently working on a feature film adaptation of a Rose Tremain short story, a television adaptation of A Place Called Winter and two of early 20th century classics…