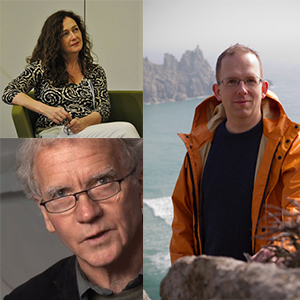 Join us for an intimate evening of story, conversation and wine with David Constantine as he discusses and reads from his latest collection, The Dressing-up box and other stories, in which several the principal characters are children: loved, abused, in danger, they are the threatened hope for a better future. David will be joined by Wyl Menmuir and the shortly to be announced Literature Works sponsored Word Factory Apprentice Award winner, hosted by Cornwall-based Word Factory Director Cathy Galvin.
—
About Cathy Galvin
Cathy Galvin is an editor, journalist, poet and founder of the Sunday Times Short Story Award and the Word Factory. Her work has appeared in journals and anthologies including the Morning Star, Agenda, Cornish Short Stories, High Spirits: A Round of Drinking Stories and London Magazine. She has published two collections with the Melos Press, Black and Blue and Rough Translation, and will be published by Guillemot Press in 2019. Awards include a Heinrich Böll Residency and a Hawthornden Fellowship.She is completing a memoir and poetry PhD at Goldsmiths College, University of London. Her journalism has appeared in the Sunday Times, Newsweek, Irish Times and The Tablet. She is the editor of Red, the Waterstones Anthology of New Writing.

About David Constantine
David Constantine was born in Salford in 1944 and worked for thirty years as a university teacher of German language and literature. He has published several volumes of poetry, and a novel (The Life-Writer) as well as four short story collections; the highly acclaimed Under the Dam (2005), The Shieling (2009), which was shortlisted for the 2010 Frank O’Connor International Short Story Award, and Tea at the Midland (2012) and The Dressing Up Boxand Other Stories (forthcoming 2019), which won the Frank O’Connor International Short Story Award in 2013 and of which the title story won the BBC National Short Story Award 2010. He lives in Oxford where, for ten years, he edited Modern Poetry in Translation.

About Wyl Menmuir
Wyl Menmuir is a novelist, editor and literary consultant based in Cornwall. His first novel, The Many, was nominated for the Man-Booker Prize and was an Observer Best Fiction of the Year pick. His short fiction has appeared in Best British Short Stories, Elementum Journal, Pipeline and has been published by Nightjar Press and National Trust. He writes for Radio 4’s Open Book and The Guardian, and is a regular contributor to the journal Elementum. Born in Stockport in 1979, Wyl now lives in Cornwall with his wife and two children. He is co-creator of the Cornish writing centre, The Writers’ Block, and works with Arvon Foundation, National Literacy Trust and Centre for Literacy in Primary Education on national literacy programmes, as well as lecturer in creative writing at Falmouth University and Manchester Metropolitan University.