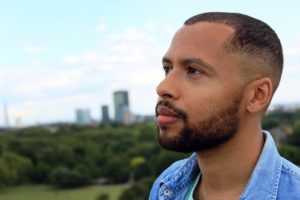 Word Online, a free virtual tour of diverse voices in libraries across the South West, makes its fifth stop via Gloucestershire libraries

We are pleased to present a reading by award winning poet and novelist, Dean Atta. He will be reading from his debut novel The Black Flamingo and discussing the book in a Q&A with Gloucestershire libraries. There will also be an opportunity for the audience to ask their questions.

You can purchase a copy of The Black Flamingo here.

Dean Atta’s debut poetry collection, I Am Nobody’s Nigger, was shortlisted for the Polari First Book Prize and his debut novel, The Black Flamingo, won the Stonewall Book Award. He was named as one of the most influential LGBT people in the UK by the Independent on Sunday. Dean’s work often deals with themes of gender, identity, race and growing up – and has appeared on BBC One, BBC Radio 4, BBC World Service, and Channel 4. Dean regularly performs across the UK, and internationally. He is a member of Malika’s Poetry Kitchen. Dean is based in Glasgow, and is Co-director of the Scottish BAME Writers Network and a patron of LGBT+ History Month.