WRITING ABOUT LOVE – WHAT DO MEN KNOW?

Home Events WRITING ABOUT LOVE – WHAT DO MEN KNOW? 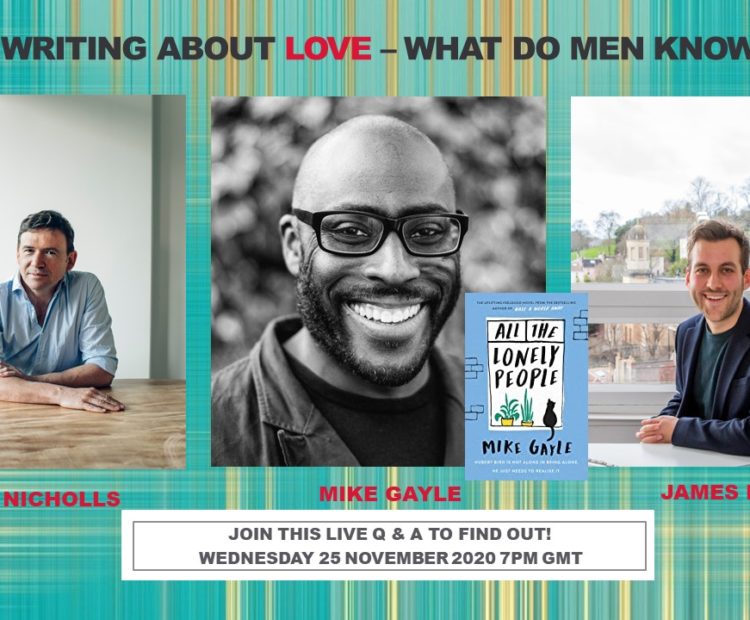 Join our live audience as we chat with David Nicholls, Mike Gayle and James Bailey, three amazing authors who write funny, heartwarming, poignant stories about love and human connection and ask them “What do men really know when writing about love?“

As one of Britain’s most successful writers David Nicholls has an incomparable talent for making us laugh, cry and wince with recognition. A talented and sought-after screenwriter, his recent adaptation Patrick Melrose from the novels by Edward St Aubyn, was loved by critics and viewers alike and won him a BAFTA for best writer and an Emmy nomination. He turned his bestselling novel One Day into a screenplay starring Anne Hathaway and the award-winning Us has been adapted into a four-part drama series starring Tom Hollander. David’s novels capture the very essence of relationships and have been published in forty languages, selling over 8 million copies worldwide. Sweet Sorrow, his latest novel, is out now in paperback.

Former magazine Feature Editor Mike Gayle became a full time novelist in 1997 following the publication of his Sunday Times Top Ten bestseller My Legendary Girlfriend, hailed by The Independent as ‘Full of belly laughs and painfully acute observations,’ and by The Times as ‘A funny, frank account of a hopeless romantic.’ To date Mike is the author of sixteen novels including Mr Commitment, Turning Thirty, Half A World Away and Wish You Were Here. Translated into over thirty languages Mike’s latest novel All The Lonely People is a funny and moving meditation on love, race, old age and friendship that will not only charm and uplift, but also remind you of the power of ordinary people to make an extraordinary difference.

Debut author James Bailey has a strong background story. Living with a heart condition James supported the charity Cardiac Risk in the Young, carrying the Olympic Torch, running the London Marathon, speaking in the House of Commons, and appearing in BBC1’s Lifeline appeal. Attending university in London, he avoided high rent by living in a Travelodge and juggled studying Spanish with working as a red carpet reporter, interviewing stars such as George Clooney, Emma Stone and David Beckham. Once he had graduated he travelled the world, journeying through twenty one countries looking for himself, and hopefully love. Having found neither, he returned home to Bristol, where he founded a walking tour company of the city and, selected for the Curtis Brown Creative’s Six Month Novel Writing Course began working on his debut novel. The Flip Side is already an e-book bestseller ahead of its November release with Penguin.

“Neither Wit Nor Taste”: Translating Motherhood in the Post-Soviet World

Tables of Silver and Gold: Writing Baby Loss and Stillbirth