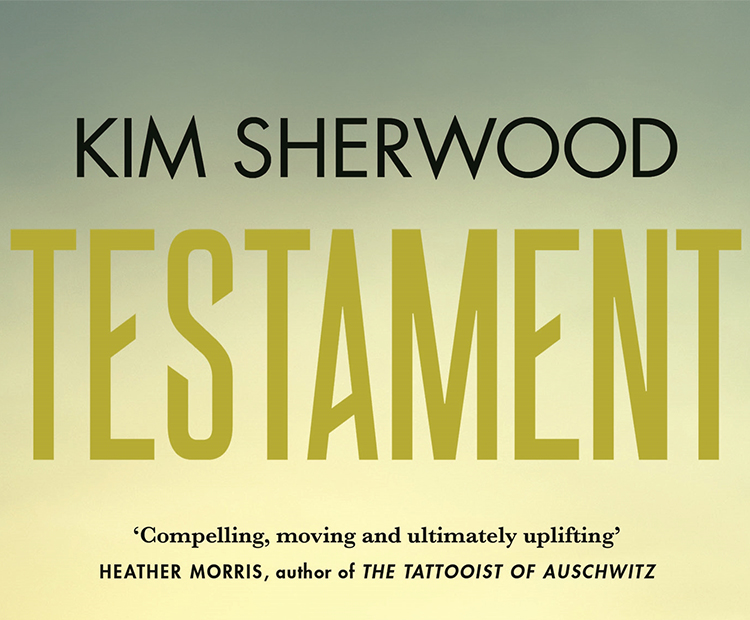 Here at Literature Works, we love celebrating the work of writers in the region. We were delighted to be asked to read an advance review copy of the debut novel, Testament from Kim Sherwood, who is based in Bath – in fact, our Literature Development Officer spent the whole day reading it…that’s the best part of her job.

Bath Novel Award 2016 winning, Testament already had a big reputation in the literary world and we can confirm that not only did it live up to expectations, it far surpassed them.

Written in confident and beautifully lyrical prose, Testament is a stunning debut which promises great things for its author. A literary time slip novel, Testament handles a global tragedy with sensitivity and incisive linguistic skill, undoubtedly informed by Sherwood’s personal connection to the tragedy. This is one of the tings which makes this novel so powerful. Not only is the Holocaust viewed on a global scale – its impact reverberating around the international places in the novel – but also on a personal level.

Owing to the novel’s skilful use of time and multiple levels of narrative, two tales are told as two realms are presented to the reader. There is a public narrative and a private one. This applies not only to the story at large, but also to the central narrative exploring the story of Eva and her grandfather Joseph Silk.

Silk is a renowned artist and much adored publicly by those who know him by his work and also privately by the granddaughter who knows him first as her grandfather.

After Silk’s passing Eva struggles to make sense of the world and this is made even more difficult when she is contacted by The Jewish Museum in Berlin, who have acquired Silk’s testament and would like to show it as part of an exhibition of Jewish artists impacted by the Holocaust. Eva does not know how to feel about this but she feels she must see the testament to make her decision.

The novel explores through employment of a dual narrative that is heart-rending in the present and harrowing and heart-breaking in the past, the nature of memory, of truth and of what it means to construct an identity – to make sense of the world.

Eva makes some discoveries about silk which make her reassess everything she thought she knew about the influential man she knew as her grandfather and together both Eva and the reader are made privy to Silk’s truth.

What was particularly powerful was the poignant use of the testament questions which punctuated the narrative. Bald and dispassionate in their nature, they are answered both in the past and present with an amazingly emotive sensitivity which sheds lights on the stories of just a few of millions who were affected by the Holocaust.

Startling, raw and intense, this is a novel which compels you to read it, almost daring you in its quiet delivery, to look away. It is unputdownable and it is beautiful.

Testament is out today, published by riverrun, an imprint of Quercus.

We caught up with Kim to ask her about her debut novel and about being a writer in the South West.

1. Testament was such a stunningly written rendering of a world tragedy made personal, the ripples of that tragedy reverberate throughout the novel. Can you tell us a bit more about the inspiration and motivation for writing the novel?

Thank you, that’s very kind of you. In many ways the intersection between personal and public loss triggered my writing Testament. When my grandfather, the actor George Baker, died, I lost a father figure, which is something very personal. I then saw that loss writ large in newspaper headlines. In Testament, Eva loses her grandfather Joseph Silk, while the nation mourns a significant artist, in some ways trespassing on her grief. Silk has excised the trauma of his past as a Holocaust Survivor from his identity. When Felix, the curator of the Jewish Museum in Berlin, tries to exhibit the witness testimony Silk gave after being liberated, Eva’s understanding of Silk is taken even further away from her.

After George died, my grandmother on my father’s side began telling me about her experiences as a Holocaust Survivor for the first time. Again I was very keenly aware of that intersection between the personal and public, because as I went on to research the Holocaust in Hungary I deeply felt its impact on my grandmother, on myself – in that I statistically should not exist – and the much larger, global impact. That was something I wanted to explore in the novel, how our personal grief can be both underpinned and overlaid by larger losses.

2. We’re very interested in memory as a theme at Literature Works. For us, Testament uses this theme in complex and interesting ways to shed light on the stories of the past but also to force the characters to face up to personal truths they would rather not. Can you talk a little more about the role of memory in the novel?

There’s a beautiful essay by the writer Tzvetan Todorov, ‘Ten Years Without Primo Levi’, in which he looks at Levi’s ideas on the relationship between memory and identity. Exploring this, he writes:

I am not simply me, now, for my past constitutes my identity. To reveal to me that this past is quite different than I believed, or in contrary to forbid me to put aside parts of it so as to live happily are actions that challenge not just an isolate compartment of my being, but my very identity. I cannot just allow such things to happen; to exercise control over them is thus in the very logic of things.

This conviction, that being allowed to construct one’s own identity through curating what we remember and what we forget is a matter of survival, drives Silk’s decision to forget or alter all that happened in his life between 1925 and 1951. His brother, László, has the opposite reaction to the traumas they have suffered, and the secrets they are, dedicating his life to remembrance. Eva and her father John are caught in this conflict. The power of memory rules over their family, and much of the novel centres on Eva’s struggle to make her own decisions about what we will be forgotten or remembered – and therefore what will constitute her identity.

3. We think that the time-slip element of the novel is achieved excellently. There is a real sense of the past compelling the future and the future simply breaking open the past. Did you always know that the novel would be a time slip?

Thank you. Yes, I did. I had the original idea for Testament in the Jewish Museum Berlin, where “voids”– largely inaccessible concrete shafts – cut through the museum. Visitors can traverse these voids through enclosed bridges, or peer down into them through narrow windows, until, finally, the Memory Void allows entrance onto its floor of steel, punctured faces, faces of people who wail silently. I began to think about what those voids represent, and how I might structurally build them into a novel. I wanted the voids to allow the past to rupture into the present.

4. There is such a harrowing and arresting story contained here, which has clearly been influenced by a lot of research – indeed research, documentation, the idea of memorialising stories, creating testaments no less is a core tenet of the plot. When writing the novel, how did you balance the research with the emotive family story you have told?

Good question. For me it was all bound up together, with research and writing driving each other. It ties into memory; the artefacts and witness testimonies I drew on were all part of a process of ensuring a larger memory, while also possessing their own personal provenance. In looking at the family photographs of victims – who Paul Ricoeur calls ‘witnesses in spite of themselves’ – you are looking not only at evidence of a monumental crime, but also a family arrested in the moment of living. The stories behind the Holocaust are all family stories. So I was dramatising that in my characters and in my plot.

It depends on where I am. I live in Bath, and my family is based in Devon. If I’m in Bath, I’ll spend the morning writing at home. I recently found a historical Ordnance Survey map in a charity shop, which I’ve been using as inspiration for afternoon walks, so after writing for a few hours I’ll go on a treasure hunt to find the old city jail or the ruins of a chapel. In Bath we’re spoilt for cafes and bookshops, and I’ll often spend the afternoon browsing Mr B’s Reading Emporium, and then writing in Green Bird Café or Society Café with cake. My second novel is set in Devon, so if I’m writing there my day will be broken up by beautiful walks in the name of research: South Milton, Bigbury Bay, Bolberry Down – we’re spoilt for choice! My mum lives in Kingsbridge, and I’ll often pop into the Cookworthy Museum for inspiration. They have Dr Johnson’s walking cane on display there at the moment.

6. If you could offer one piece of advice to a new writer looking to enter the same genre, what would it be?

Good question. The best advice I could probably give is to remember that in some ways it’s good to feel overwhelmed or haunted by all you are researching and writing. If you didn’t, it would mean you’d become numb to it. And it’s important to have relief. For a long time mine was Star Trek, whose utopian vision of humanity you’d think could cheer anyone up. But then of course I got to the Voyager plotline about the Holocaust, and my utopian vision let me down entirely.