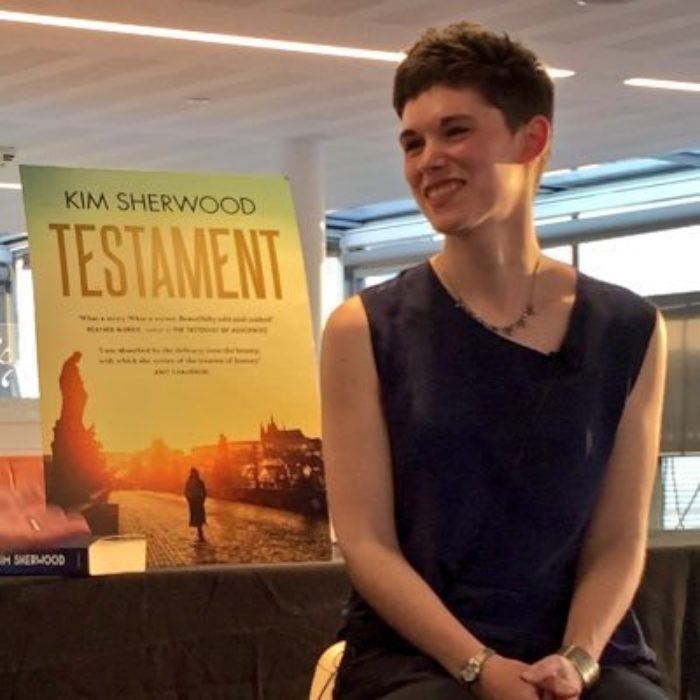 Kim Sherwood was born in Camden in 1989 and lives in Bath. She studied Creative Writing at UEA, is now Senior Lecturer at the University of the West of England, and teaches creative writing in prisons. Kim has also taught creative writing in schools and libraries. Her short fiction and essays have appeared in Mslexia, Lighthouse, Going Down Swinging, Hotel, The Letters Page, and elsewhere.

Kim began researching and writing Testament, her first novel, after her grandfather, the actor George Baker, passed away, and her grandmother began to talk about her experiences as a Holocaust Survivor for the first time. Testament won the 2016 Bath Novel Award, and is published with riverrun in July 2018 as the lead literary debut for Quercus, and Hachette international pick. Testament has been called ‘beautiful, subtle, elegiac’ by Amit Chaudhuri, ‘compelling, moving and ultimately uplifting’ by Heather Morris, and ‘a masterfully composed and ambitious novel that really grips its reader – intense, full of hard-researched detail and vivid, original language’ by George Szirtes. Kim’s second novel will explore the literary and maritime history of Devon and its landscape.

Second novel - Ongoing - My second novel is based in Devon, and draws on the literary and maritime history of the South West and its landscape

Research Establishment Time Scheme - July 2018-July 2019 - I am being supported in researching my second novel by the University of the West of England, where I teach